By Sam Gindin and Leo Panitch 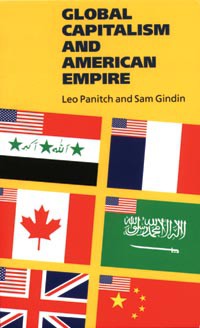 The American Empire has usually come in through the back door rather than the front door: its own empire of business was made plausible and attractive by the American state’s insistence that it was not imperialistic.

The USA presented itself as the scourge of the old colonialism, spreading democracy and freedom of opportunity, rather than an old-style Empire of armed conquest. Its informal empire, uniquely combining, as Thomas Jefferson put it, ‘extensive empire with self-government’, has allowed American business to directly invest abroad and produce and sell there, with the American state politically requiring the host states to protect and maintain capitalism.

After the Second World War, the USA integrated the states of Japan and Western Europe into own informal empire, bringing an end to the old inter-imperial rivalries. Through the crisis of the Bretton Woods system in the 1970s, American hegemony, far from being fundamentally challenged by the other advanced capitalist states, came to be reconstituted in the form of global neoliberalism. Under American-managed globalization all international institutions and individual states are expected to become pliant but active agents in reproducing global capitalism.

“The unconcealed imperial face that the American state is now prepared to show to the world above all pertains to the increasing difficulties of managing a truly global informal empire… The need to try to refashion all the states of the world so that they become at least minimally adequate for the administration of global order-is now the central- problem for the American state.”