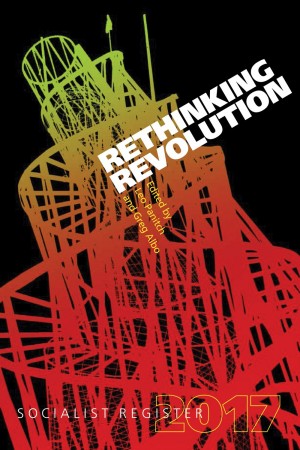 This 53rd volume of the Socialist Register addresses the question of the meaning of revolution in the twenty-first century. Coming to terms with the legacy of 1917 is obviously one aspect of this. ‘October’ was a unique event that provided inspiration for millions of oppressed people, and also became an inevitable point of reference for socialist politics in the twentieth century. The twenty-first century left needs to both understand and transcend this legacy through a critical reappraisal of its broad effects – both positive and negative – on political, intellectual and cultural life everywhere as well as on the other revolutions that took place over the last century. But the main point of the volume is to look forward more than back. All revolutions emerge in conjunctures saturated with unique contra-dictions, contingencies, class alignments and struggles.

This concrete confluence of forces constitutes the political conditions that revolutionaries must not only understand, but also act and organize within. The ‘political event’ of gaining state power, whether by taking parliament or in a collapse of the existing political regime, has proven time and again to be less crucial than the social revolution of building capacities for self-government and the democratization and socialization of institutional resources. The ‘event’, in itself, may be a dramatic rupture that opens up new political possibilities and imaginaries bursting beyond the limited horizons of capitalist market calculation. But it will never be a sufficient condition for the exploited and oppressed to build their own capacities for establishing collective, rather than competitive, ways of living through developing socialist democracy. There is a need, in this context, for the left to maintain an openness to, and patience with, the quite varied experiments in social alternatives to neoliberalism as they emerge in the current period. It is anything but clear where new space for projects of structural reform might open up, or more profound ruptures might suddenly burst onto the political scene.