By Leo Panitch and Greg Albo 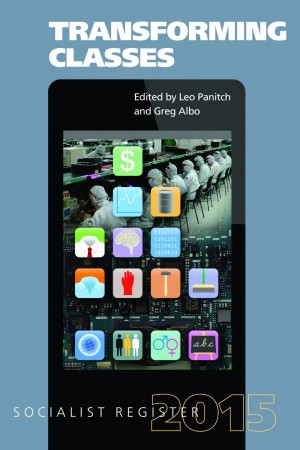 By devoting the 2015 Socialist Register to investigating class formation and class strategies on a global scale, as we also did the 2014 volume marking the Register’s fiftieth anniversary, we were going against fashion in quite deliberately emphasizing the fundamental importance of class analysis, class discourse and class politics for the twenty-first century. It has unfortunately been the case that even in left circles over the past several decades any talk of class, let alone class struggle, became decidedly unfashionable. Of course, this was in many ways a very old story. When the Register was founded in 1964, the irrelevance of class had already been proclaimed in mainstream intellectual circles, and this was increasingly echoed by the leaders of social democratic parties. Twenty years later, as the political compass of even the more radical left began to swing to a proliferation of ‘other’ identities, Ralph Miliband faced this head-on in the 1983 Register: ‘Socialist work means intervention in all the many different areas of life in which class struggle occurs: for class struggle must be taken to mean not only the permanent struggle between capital and labour, crucial though that remains, but the struggle against racial and sex discrimination, the struggle against arbitrary state and police power, the struggle against the ideological hegemony of the conservative forces, and the struggle for new and radically different defence and foreign policies’. Yet, amidst an endless stream of images across the new communication technologies, the left’s attention became more and more focused on those very spaces of ‘civil society’ and the ‘global economy’ in which class relations and class struggles seemed all too little visible.

The current volume, Transforming Classes, takes as its departure point class relations in this latter sense – the way working classes are being made and remade in the struggles against neoliberalism, austerity and authoritarian governments. Indeed, the purpose here is to take an account of the balance of class forces, the old and emerging forms of workplace and political organization, and the strategies being debated and adapted in different zones of the world. The volume begins with an essay that cuts new ground in theorizing the working-class experience from the prism of social reproduction, wherein race, gender, ethnicity and migration are all constitutive of class and necessarily define key features of the terrain of class struggle. As much in the advanced capitalist countries as in the most imperialized zones of the Global South – in fact, through their mutual imbrication in global labour markets – workers’ livelihoods, particularly those of migrants, are directly connected to household formation across borders. Taking up this concern to develop a truly global awareness of the transformations of social classes and class politics, the essays that follow – as authoritative in their appraisals as in their range – focus not only on such key developing capitalist countries as India, South Africa, Turkey, Egypt, Brazil and Chile, but also on the momentous political and discursive dimensions of the capitalist transformation of class relations in China under the auspices of the ruling Communist Party. And no less indispensable to the overall assessment of global capitalism are the essays here that attend to the advanced capitalist world. In both trying to understand the transformations which the so-called new middle classes have been going through as well as the state of trade unionism in Europe and North America, these essays focus on the need to develop an adequate class theory and class politics for today. In this respect, the four essays that compose the symposium on ‘Labour and the Left in the USA’, with which this volume concludes, provide not only sober readings but also shed light on promising campaigns for new working-class organizations in and beyond the workplace even in the imperial centre of world capitalism.