The Impasse of Modernity

Debating the Future of the Global Market Economy 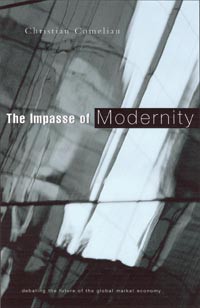 There is a deep unease is growing over the direction of modern society. Christian Comeliau, a well-known French economist, argues that understanding the historical logic of modernity must start with the economy, but that constructive discussion of the future must look at economics within the framework of society’s goals and the limits of Nature.

Comeliau critiques the dominant position of market economics in our social system-whose core social value has become the maximization of profit. The consequences of this are illustrated by examining four contemporary phenomena. The idea of indefinite economic growth as the mainspring of development; the intensification of social inequality and the future of work; difficulties resulting from globalization and the present system of international trade; and the uncertain future role of the state.

Humanity is confronted by a profoundly alienating, contradictory modernity without a viable future. Another future requires a belief in the rediscovery of politics. This, in turn, has to start with a thorough debate in each society about its fundamental purposes. This book puts forward the broad issues that such a debate must focus on.