The Politics of Transnational Movements 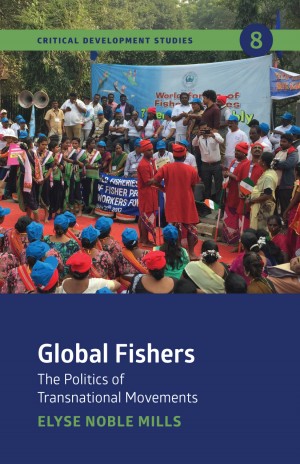 Global politics around fisheries are complex and contentious. Embedded within this sector, small-scale fishers’ movements are continuously confronted with new actors, issues and conflicting interests. Yet, these movements and their political agendas have played a critical role in global fisheries. This book offers an insightful exploration and analysis of two transnational movements — the World Forum of Fisher Peoples (WFFP) and the World Forum of Fish Harvesters and Fish Workers (WFF) — tracing their origins, development, struggles and engagement in international political spaces. It explores three overlapping analytical spheres: transnational movements contesting and seeking to influence the politics of global fisheries; international political spaces movements are prioritizing; and contentious fisheries issues movements are struggling over.

“Global Fishers: The Politics of Transnational Movements by Elyse Mills is a pathbreaking book about a very important but largely overlooked transnational social movement. It is a modern classic in the making. All academic researchers and activists interested in social justice and a positive future of humanity must read this book.”

“Global Fishers offers an unparalleled historical account of one of the world’s lesser known, but vitally important social movements. But Elyse Mills’ book is more than a history of the transnational fishers’ movement, it is also an insider account of political strategies, splits and struggles as they unfold to resist the ever-shifting forces of industrialization, privatization and extractivism. Essential reading for students of anthropology, development studies and politics who know that history is made as much from the bottom-up as it is from the top-down.”

— Liam Campling, author of Capitalism and the Sea (Verso, 2021) and Professor of International Business and Development, Queen Mary University of London

“Can we conceive food sovereignty and climate justice without the peoples from the lakes, rivers and oceans? Clearly not and yet we know little about them. This book is a ground breaking contribution to fill this gap. It tells the story of the fisher peoples, their struggles and aspirations, and how they have organized to defend not just themselves but our blue planet.”

“This book fills an important gap in the literature on global politics and transnational social movements through its focus on small-scale fishers’ movements.”

Elyse Noble Mills has written the definitive account of transnational fishers’ movements, such as the World Forum of Fisher Peoples (WFFP) and the World Forum of Fish Harvesters and Fish Workers (WFF). But this magnificent book is more than that, analyzing not just justice movements of small-scale fishers but also the varied global governance arenas that deal with ocean and inland aquatic resources, climate change, plummeting seafood stocks, and thorny issues of geopolitics, biodiversity, and intellectual property of genetic material. A remarkable tour-de-force!”

“Global Fishers: The Politics of Transnational Movements is a fascinating book that should be essential reading for anyone interested in the world’s small-scale fisheries, in social justice movements, and in big global issues of climate change and food security. Mills explores how these all inter-relate, in an intriguing book that looks back in time, and forward, through the lens of the two major international fishers’ movements.”

“Mills has crafted a clear, well organized and highly informative book describing the struggles, politics, aspirations and possibilities of the global “fisheries justice” movements. It is a ‘must read’ for students of history, food justice activists, and indeed for anyone who seeks to understand the critical link between small-scale fishers, food security, ecological health and climate change.”

“In this empirically rich and carefully argued book, Elyse Mills analyses the structural conditions which shaped the transnational fishers’ struggles for justice and recognition. She shows how activists were able to build and maintain through painstaking organizational work an effective movement, which not only defended fishers’ interests but also contributed to food sovereignty and agrarian justice movements. This is essential reading for scholars and activists interested in social movements and environmental justice.”

“Millions of fishermen and women in developing countries undergo great hardship because of the waves of industrialization, privatization and conservation that have whipped their industries. In response, however, they have organized themselves and fought battles to defend their ways of life. This book provides a thoughtful analysis of the backgrounds and the political strategies of the most important international fishers’ movements of this moment. The author must be congratulated for contributing a timely account of this overlooked corner of global food politics.”