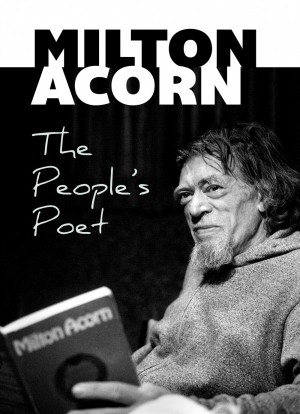 When Canadian icon and original Canadian People’s Poet Milton Acorn was passed over for the Governor General’s Award for his 1969 collection I’ve Tasted My Blood, several of his peers, including Margaret Atwood, Pat Lane and Mordecai Richler, established the People’s Poetry Award, which they presented to Milton at a ceremony at Grossman’s Tavern in Toronto in 1970.

When I’ve Tasted My Blood was re-issued in 1978 by Steel Rail Publishing, Milton wrote corrections and edits for the new edition on a copy of the original book. Milton Acorn: The People’s Poet reproduces that copy of I’ve Tasted My Blood with Milton’s handwritten notes. It also includes never-before-published photographs of Milton taken by Kent Nason, a studio recording of Milton reading many of his poems, and a 1971 documentary film about Milton Acorn made by Kent Martin and Errol Sharpe.

Though Milton Acorn died in 1986 at a young age, the prolific poet, writer and playwright is still remembered as one of Canada’s greatest poets. This one-of-a-kind multi-media collectors item and memorial is a must have for everyone who counts themselves a fan of the original Canadian People’s Poet.