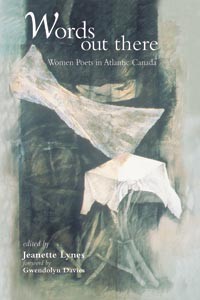 “A book of women poets in Atlantic Canada – not a moment too soon.” –PK Page

“Every once in a while an anthology comes along that feels absolutely necessary. It tells us something we need to know about a certain group of people or it alerts us to significant goings-on outside the centres of influence and power. This is such a book. But beyond what it tells us of women poets who write out of the Atlantic provinces, it demands our attention because the writing is so damn fine. Add to the stunning images and music, the other half of the book – the interviews where the poets speak of their art and their love of where they are – and you have a marvelous collection of voices that weave in and out of one another, speaking a woman’s life, speaking a place, with authenticity, vitality and power. What a gift this book is to us!”

“The past decade has seen an unprecedented burgeoning of poetry written by women in Atlantic Canada. Long into the future, we’ll be grateful to Jeanette Lynes for bringing together into one book their voices, obsessions, opinions, aims, and influences. This anthology provides a fascinating tour of contrasting poetics.”