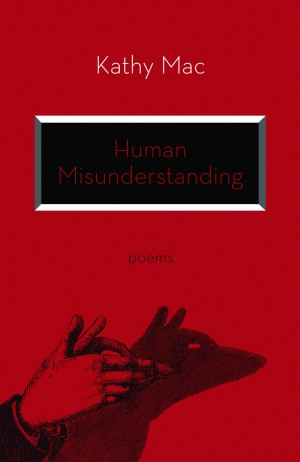 Human Misunderstanding is the latest work by award-winning poet Kathy Mac. The first of the book’s three long poems compares a fictional child soldier (a hero) with a real child soldier (a victim). The second juxtaposes eighteenth century philosophy with one person’s search for another in downtown Halifax. The final poem explores two court cases in which an immigrant faces deportation, and torture, if found guilty of assault in a Canadian court.

Kathy Mac sees inside language-as-propaganda, identifying all the twists and turns that facts suffer as they become half-truths or false justifications for evils, She knows and shows that the rhetoric of the War on Terror enacts a War on Truth. Accept no substitutes for her truth-telling, which is liberating.

With Human Misunderstanding, Kathy Mac achieves a seemingly impossible task. She brings levity and lyricism to serious tragedies, ranging from the detention and torture of Omar Khadr in Guantánamo Bay, to the disintegration of a relationship, to two prosecutions for sexual assault. Human misery is made more redeemable by Mac’s thoughtful exploration. Readers should be forewarned that living with greater clarity and care are possible outcomes of reading this delicate collection.

Kathy Mac has what philosopher David Hume has called an “accurate knowledge of the internal fabric.” We misread, hurt, and destroy one another at every turn. Her spare, sharp poetic pierces the heart of what matters, what it might mean if we were both human and humane.