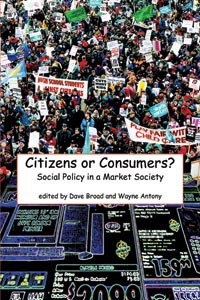 Social policy is about citizens choosing the kind of society they want to live in. The mid-20th Century Keynesian welfare state can be seen as a citizenship package which included acceptance of intervention by the state to maintain economic growth and social stability, that meant the inclusion of many previously excluded groups in the social policy process and the institutionalization of a collective responsibility for individual welfare. But, with the ascendancy of neo-liberalism, the politics of citizenship is being replaced by a notion of citizens as consumers, whose medium of social interaction and source of economic and social security is the capitalist market.

This book is concerned with social welfare problems and the need for citizen participation in addressing those problems. While all of the authors are critical of the current neo-liberal orthodoxy, none advocates a return to the status quo ante of the post-World War II welfare state. The essays are grouped into three parts: conceptual critiques of neo-liberal social policy; specific empirical analyses of the neo-liberal counter-revolution; and conceptual and practical responses for moving beyond neo-liberalism.