Globalization and the Casual Labour Problem in Canada 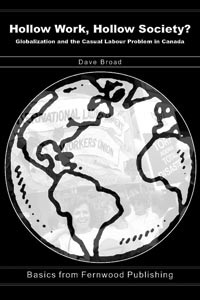 More and more people in Canada and other Western countries are now working at part-time, short-term and other casual jobs. People are now asking: What happened to full-time employment? Why is part-time work being promoted by business people and politicians as a positive thing? Situated historically, the restructuring of global capital and labour markets does not paint such a rosy picture. This book explains the contemporary casualization of work as integral to global economic restructuring. Hence, the increase in casual work is not simply a reflex of the expansion of the service sector, or of women’s post-second world war re-entry into paid employment, but is tied to a business agenda aimed at improving corporate profitability and controlling labour. A discussion of more democratic alternatives to the hollow society concludes the book.