The Politics of Peter Kormos 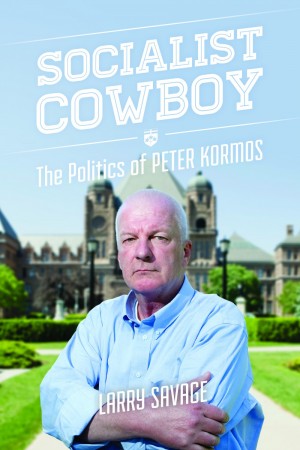 Socialist Cowboy is a political biography detailing the life and activism of longtime New Democrat MPP Peter Kormos, one of the most colourful and controversial political personalities in the history of Ontario politics. Throughout his illustrious twenty-three year career as a member of the Ontario legislature, Kormos’s unapologetic commitment to democratic socialism and his shoot-from-the-hip brand of small-town populism won him strong accolades back in his blue-collar hometown of Welland, while raising eyebrows at Queen’s Park and within his own party. From his days as a student strike leader, to his short-lived time in Bob Rae’s cabinet, to his run for the Ontario NDP leadership and his epic battles with the province’s political establishment, the book chronicles Kormos’s political trajectory, through interviews and archival research, with a view to unpacking the ideas and traits that have made him a New Democrat icon.

“A rich, entertaining and original take on the political life of Peter Kormos … a lone voice of progressive criticism who never wavered in his commitment to the labour movement.”