From Corporate Globalization to Global Co-operation

We Owe It to Our Grandchildren 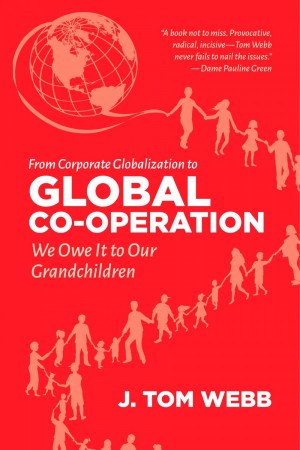 This book is about the need for an alternative to capitalism. But what does that alternative look like? And given the ever-increasing wealth and power of the 1 percent and the fact that corporations are given carte blanche to turn natural resources into profit, is an alternative possible?

Tom Webb argues that a massive shift to social enterprise, primarily co-operatives, is required. More than 250 million people around the world work for co-operatives, and co-operatives impact the lives of three billion people. This model reduces almost every negative impact of capitalism — it is a model that works.

Webb outlines the principles co-operatives need to hold to if they are to be a successful alternative to capitalism and examines the public-policy changes needed to nurture such a transition, but he remains neither wildly optimistic nor unduly pessimistic. A better world is possible, but it is not inevitable.

“Many voices are calling for wide-ranging changes to our economic, social and political systems. They are driven by concerns about rising inequality, the destruction of nature, and the undermining of democracy resulting from increasing global corporate power. Tom Webb’s important contribution ‘From Corporate Globalization to Global Co-operation’ stands out from the crowd because of his impassioned, informed and inspiring advocacy of the co-operative business model as an essential feature of any successful alternative to the current system of ailing capitalism and its dependence on endless economic growth.”

— Peter A. Victor, Author of Managing Without Growth

At his best as a story teller, Tom Webb delivers a collection of reflections about humanity in disconnect with its economic life. His unwavering trust in people and co-operation come through in every chapter, as does the sorrow in witnessing our civilization melt away at our collective fingertips. A mix between observation and hope, the book is a legacy of a true visionary co-operator who, by stating the obvious, always points out to everything we, humans, take for granted.”

This is a book that not only experts, but concerned citizens should read. With outstanding clarity the author shows the enormous degree to which conventional economics is alien to the real world. If economics were a science, economists would behave like scientists. That is; if a theory proves to be wrong, the scientist immediately starts searching for an alternative. This is exactly what conventional economists never do. No matter how disastrous an economic situation may be, the answer is always “more of the same”. Thatcher´s TINA (There is no alternative) is the most dramatic case that has done so much damage to the world. But an additional value of the book is the true alternatives for a New Economy that the author brilliantly offers. After reading the book, one feels that, after all, a better world is possible.

A book not to miss. Provocative, radical, incisive Tom Webb never fails to nail the issues.

This will be a very useful book for those who want to know about cooperation but also for those inside cooperation who wonder how to fix up the problems that cooperatives sometimes face. We particularly agree on the book’s premise, that cooperation is based on an anthropological assumption that is opposite to that of the mainstream, namely the “innate goodness of people” who practice the “golden rule” of reciprocity. Those people must have appropriate institutions to express that golden rule and not be constrained into egoistic structures.

— Dr. Stefano Zamagni and Dr. Vera Negri, University of Bologna, Professor Zamagni was a member of the Executive Committee of International Economy Association (1989-1999) and Steering Committee of Pontifical Academy of Social Sciences.

The journey this book offers asks the reader to pack two items: A belief that we can build a healthier and more equitable world, and a willingness to be of open mind and heart to drive the innovation and creativity that diverse thinking creates.

The market system that triumphs over most of the Earth today is a clear danger to the health of many life forms, including human societies. In describing his lifelong commitment to cooperatives as an alternative approach to production, Tom Webb offers hope for movement toward a realistic alternative economic/social system. This books offers practical, experience-based information on how to understand the cooperative movement, and how to help it expand its influence.”

We all know something is fundamentally wrong in our world, wrong in a way that requires a deep transformation in our thinking and behaviour. Tom Webb offers a path to another future, one based on co-operation and respect for the whole of creation. A lovely book.

— Maude Barlow, National Chairperson of the Council of Canadians and winner of the 2005 Right Livelihood Award

Tom Webb is a passionate visionary and he is surely right in the core claim of this important book, that the world needs co-operation now more than ever.