Capitalism and the Politics of Climate Change 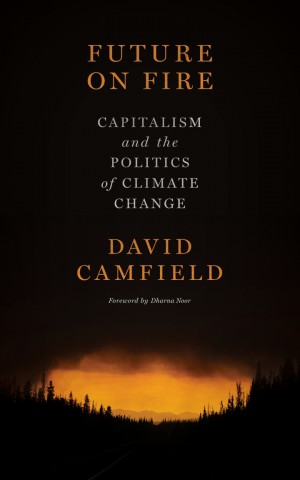 Climate change is already affecting millions of people. Governments talk about taking action to limit global heating to 2 degrees Celsius above pre-industrial levels, but the greenhouse gas emissions allowed by their policies have the Earth on track to heating far more than that by the end of the century - a level of heating that will have truly disastrous consequences. Visionary plans for how to slash emissions and make society better at the same time abound, including various Green New Deals. But how can we make the changes that are so urgently needed?

Future on Fire argues that a just transition from fossil fuels and other drivers of climate change will not be delivered by businesspeople or politicians that support the status quo. Nor will electing green left leaders be enough to overcome the opposition of capitalists and state bureaucrats. Only the power of disruptive mass social movements has the potential to force governments to make the changes we need, so supporters of climate justice should commit to building them. Confronting the question — what if heating above 2 degrees becomes unavoidable — and refusing to despair, David Camfield argues that even a ravaged planet is worth fighting for and that ultimately the only solution to the ecological crisis created by capitalism is a transition to ecosocialism.

“At last, a book that can be shared with anyone awakening to the urgency of climate justice. In clear and accessible prose, Future on Fire shows us why we are in an ecological crisis; and what it will take to move beyond it. With meticulous care, David Camfield lays out sharp and compelling arguments for building mass movements that set their sights on ecosocialism. Spread the word”

— David McNally, Cullen Distinguished Professor of History and Business, University of Houston, and author of Global Slump: The Economics and Politics of Crisis and Resistance

“Naomi Klein says only mass movements can save us from climate catastrophe. In this clear, concise, and absolutely convincing book, David Camfield shows why that is, and how we can build an effective movement to stop capitalism’s deadly assault on our planet. Essential reading for every climate activist.”

— Ian Angus, author of Facing the Anthropocene and editor of climateandcapitalism.com

“In these times of rising oceans and constant bruising of the natural world it is easy to feel hopeless and alone. David Camfield’s fine-grained study shows precisely where the resources for hope lie: in collective mass movements that threaten capitalism’s power and its planet-destroying drive for profit. It is essential reading for all those seeking to put the brakes on accumulation, but especially for those who dare to imagine a world of beauty and justice.”

— Tithi Bhattacharya, co-author of Feminism for the 99%

“Facing up to the climate crisis means building mass movements, but what does this entail? David Camfield has given activists an indispensable guide to the key issues and the practical implications.”

“This book is a powerfully concise and brilliant primer on the connections between climate change and capitalism, and the potential of social movements. Camfield weaves in lessons from history, dispels false solutions to the crisis, and lays out clear opportunities. Perfect for climate justice organizers and climate strikers thinking through strategy and what it will take to win the world we so urgently need.”

“We know what the solutions are - David Camfield asks the question we should all be focusing on now: what is stopping policymakers from acting? Camfield argues that we - the workers, students, and caregivers of civil society - have a critical role to play, not as consumers or even primarily as voters, but as builders of mass movements. It is a compelling argument for the power we hold when we organize collectively. This book is illuminating, empowering, and hopeful.”

“This is an excellent book that clearly articulates exactly why we need to understand the politics of the climate crisis in order to be able to effectively approach it. Camfield makes a very robust case for why the climate movement should be mass in scale, anti-capitalist and intersectional. Not as a nice addition, but as an absolute necessity if we are to win. This is essential reading for anyone concerned about climate change and how we ought to face it, succinctly laying out what we need to do, why and how.”