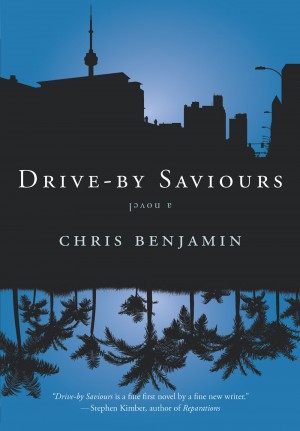 Demoralized by his job and dissatisfied with his life, Mark punches the clock with increasing indifference. He wanted to help people; he’d always believed that as social worker he would be able to make a difference in people’s lives. But after six years of bureaucracy and pushing paper Mark has lost hope.

All that changes when he meets Bumi, an Indonesian restaurant worker. Moved from his small fishing village and sent to a residential school under the authoritarian Suharto regime, Bumi’s radical genius and obsessive-compulsive disorder raise suspicion among his paranoid neighbours. When several local children die mysteriously the neighbours fear reaches a fevered pitch and Bumi is forced to flee to Canada.

Brought together by a chance encounter on the subway, Mark and Bumi develop a friendship that forces them to confront their pasts. Moving gracefully between Canada and Indonesia and through the two men’s histories, Drive-by Saviours is the story of desire and connection among lonely people adrift in a crowded world.

“Chris Benjamin masterfully, magically weaves together the seemingly disconnected worlds of Mark, a failed social-worker-turned-unhappy-grant-writer coming to the end of an even unhappier relationship, and Bumi, an Indonesian illegal immigrant on the run from his past and the ocd that dogs his present. Their chance encounter on a Toronto subway launches them on a complicated friendship that allows both men to finally confront the demons in their pasts and to find the hope in their futures.”

“Chris Benjamin’s debut novel is part contemporary fiction, part social commentary and part kick-in-the-ass storytelling. Although refreshingly unique in its portrayal of Indonesia’s cultural landscape, with its universal themes of greed, betrayal, family and redemption, Drive-by Saviours transcends both time and place. Through weaving Bumi’s tenacity with Mark’s ennui, Benjamin skillfully elucidates how globalization entangles us all in an artificially exploitive web and how escape can only be found through creating genuine bonds, those that deeply connect us one to another.”