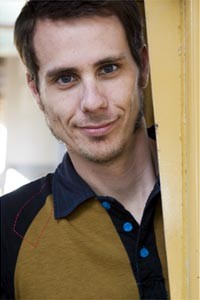 Chris Benjamin stumbled from Nova Scotia’s suburban badlands at the bewildered age of 21 years, clutching a hard-earned Marketing Communications degree from Dalhousie University. He has since been a market analyst in Waterloo, a forestry officer in St. Lucia, a farm worker in British Columbia, an environmental consultant in Indonesia, a researcher in Indonesia—-he published a summary of his work there with the University of Waterloo Press—-a hitchhiker across North America, an advocate for new Canadians in Toronto, a reclusive novelist in Finland, a reluctant train tourist in Russia, Mongolia, China and Japan, a journalist in Ghana, and an environmental lobbyist in Nova Scotia.

Sometime along the way he picked up a Master’s degree in Environmental Studies from York University and a small grant from the Toronto Arts Council to write this novel, which won the Percy Prize for best novel in the Atlantic Writing Competition. Chris has been a freelance writer throughout and has published hundreds of news stories, features, essays, and editorials in various anthologies, newspapers, magazines, and online publications. He is now the Sustainable City Columnist for The Coast weekly newspaper in Halifax. Chris has written fiction and features for The Toronto Star, VoicePrint Canada, This Magazine, Now Magazine, Descant, Nashwaak Review, Pottersfield Press, Rattling Books, the University of Waterloo Press, Z Magazine, Briarpatch Magazine, The Chronicle Herald, Progress Magazine, The Maritime Policy Review, and many others. He lives with his wife and little boy in a house owned by two cats in Halifax, Nova Scotia.