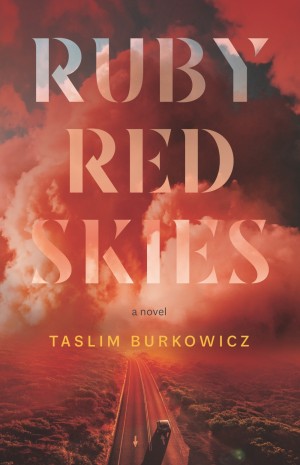 Ruby used to be a fiery, sexy, musical genius. But when she got pregnant as a teenager in the 90s, her life took a turn into banality. Now a middle-aged Indo-Canadian woman, she feels unseen and unheard by her white husband and struggles to communicate with her mixed-race daughter. When she discovers her husband cheating, she embarks on a quest to unearth exciting secrets from her past. To find what she needs, she drives straight into B.C.’s raging wildfires, accompanied only by the fantastical stories her mother used to tell about their ancient Mughal ancestry — a dancer named Rubina who lived in the concubine quarters of the great Agra Fort. This book is at once historical fiction and political romance, deftly navigating themes of mixed-race relationships, climate change, motherhood, body shame, death and the passage of time.

“A story of two women who live centuries apart but share a journey towards resilience. The depictions of Ruby and Rubina, as women travelling arduous paths to understand their needs and aspirations, are as painful as they are accurate. The character of Ruby Malkhana beautifully portrays the tragic experiences of women of colour in Canada, people who are invisible and othered in their own homes and communities. Taslim Burkowicz’s novel encourages us to consider our own journey, the paths that lead us away from ourselves, and the paradigms that explain our choices.”

“In Taslim Burkowicz’s enchanting novel Ruby Red Skies, two distant places and moments in time—a wildfire-ravaged, contemporary British Columbia and the courtly interiors of seventeenth century Mughal India—are artfully juxtaposed, making for a highly inventive and readable tale driven by questions of paternity, mothering, marriage, race and the quest for self-affirmation. Burkowicz skillfully embroiders each context through the memorable characters of Ruby, a South Asian-Canadian housewife facing a loveless interracial marriage, and Rubina, a dancing girl determined not to fall prey to a concubine’s fate, each of whom reminds us, at every turn of their intersecting stories, that the here and now is often powerfully reimagined by the histories we carry within us. A deftly crafted novel that expands the historical echoes and cultural geographies of Canadian literature.”