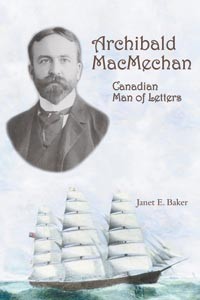 Archibald MacMechan taught English at Dalhousie University in Halifax, Nova Scotia, between 1889 and 1931. His students included Ernest Buckler, Lucy Maud Montgomery and Helen Creighton, and his influence as a teacher was far reaching. He was very active as a book reviewer whose reviews were widely read and often ahead of their time. Writers as disparate as Herman Melville and Virginia Woolf wrote to him expressing their appreciation of his readings of their work. MacMechan himself thought he would be best remembered as a chronicler of Nova Scotia’s seafaring past. His accounts of significant moments in the province’s history were published in three volumes – Old Province Tales, Sagas of the Sea, and There Go the Ships. Popular when they were published in the 1920s, they are now out of print. This study of Mac Mechan is an attempt to place his work in its context and bring it to the attention of a new generation of readers.