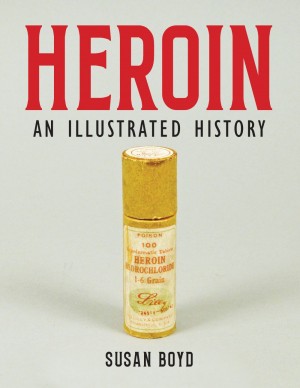 Heroin is an illustrated history of Canadian heroin regulation over two centuries. Susan Boyd points to our failure to address the overdose death epidemic caused by criminalizing drug users and to the decades of resistance to harm-reduction policies. Heroin, discovered in 1898, was heralded as an important medicine and successfully marketed as a pain reliever and cough suppressant. Until the early 1950s, heroin was prescribed for therapeutic use in Canada. Yet, illegal heroin use became the focus of drug prohibition advocates and law enforcement, who painted it as highly addictive and destructive. Systemic racism was the impetus for our first anti-heroin laws; the race, gender and class of users influenced drug control, which, by the 1930s, became the focus of law enforcement. Flawed ideas about heroin and people who use the drug have shaped drug law and policy for decades. This book is informed by documentary evidence and the experiences of people who use/used heroin, drug user unions and harm-reduction advocates. These sources highlight the structural violence of drug policy that uses prohibition and criminalization as the main response to drug use.

Take a peek inside this beautiful book designed by David Lester!

“In Heroin: An Illustrated History, Susan Boyd traces a compelling and damning portrait of the longstanding harms of drug criminalization in Canada. The work highlights the necessity of following drug-user led movements … to create a society geared toward collective health and well-being rather than punishment.”

“Susan Boyd’s book Heroin provides great insight into the early days of drug prohibition whilst also delving into questions of modern-day drug laws. Susan carefully articulates the history of drug user activism with a great understanding of racial and gender disparities that plague our community. The Canadian Association of People who Use Drugs fully endorses Heroin and believes its a must-read.”

— Natasha Touesnard and Frank Crichlow, Executive Director and President of the Canadian Association of People who Use Drugs (CAPUD)