We Were Not The Savages, First Nations History, 4th ed. 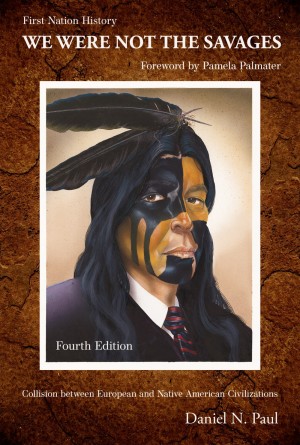 The title of this book We Were Not the Savages speaks to the truth of what happened when Europeans invaded Mi’kmaw lands in the 17th century. Prior to the European invasion the Mi’kmaq lived healthy lives and for thousands of years had lived in harmony with nature in the land they called Mi’kma’ki. This book sets the record straight. When the Europeans arrived they were welcomed and sustained by the Mi’kmaq. Over the next three centuries their language, their culture, their way of life were systematically ravaged by the newcomers to whom they had extended human kindness. The murderous savagery of British scalp proclamations, starvation, malnutrition and Canada’s Indian residential and day schools all but wiped out the Mi’kmaq. Yet the Mi’kmaq survived and today stand defending the land, the water and nature’s bounty from the European way of life, which threatens the natural world we live in and need to survive.

Since the first edition was published in 1993, Daniel Paul’s ongoing research confronts the mainstream record of Canadian settler colonialism and reveals that the mistreatment of Indigenous Peoples is not confined to the past. In this 4th edition the author shares his research, which catalogues not only the historical tragedy but the ongoing attempts to silence the Mi’kmaq and other Indigenous Peoples. Paul’s work continues to give the Mi’kmaq a voice that must be heard.

We Were Not the Savages is something rare and wonderful, a comprehensive history of an indigenous American people, written by a member of the nation, covering in detail the times before European colonisation, the brutal period of conquest, and the struggle for justice that continues to the present day. The book is disarmingly and engagingly written. Every story within it is either carefully documented with citations to archival material or scholarly sources, or else deeply informed by Paul’s personal experience and what he has learned from his neighbours. Those of you who have read earlier editions of this book should pick up this one. Paul has thoroughly rewritten the book, updating the scholarship, adding personal material, and carrying the story forward to the present day. Our understanding of the history of north-eastern North America has been transformed since the publication of the first edition of We Were Not the Savages. Especially in Nova Scotia, the impact of that transformation is visible on the landscape. If you want to understand what’s happened, you need to read the fourth edition.

“We Were Not the Savages is the Native American history book written for me. Here is a native author who used the Europeans’ own documents to prove their dastardly deeds and show that, when compared to the Mi’kmaq, the Europeans were the honorless savages. Daniel N. Paul puts history under the microscope, and it does not look anything like the history textbooks utilized throughout North America.”

“We Were Not the Savages is an intellectual blockbuster that shook the foundations of Nova Scotian history. The title alone upended the smug sense that this land was only ever European. The deeply researched book proved Mi’kma’ki is home to an ancient civilization, upon which everything else was built.”

— Jon Tattrie, journalist and author of eight books, including Cornwallis: The Violent Birth of Halifax

“Reading the pages of this book continually affirms for me how good it is to be a Mi’kmaq. I so wish that my father was still living. Wouldn’t he be so proud that such a book was available. I also wish that this history book was in existence years ago, a book that now empowers me and fills me with great pride to be a Mi’kmaq.”

“Daniel N. Paul exposes a history that Canadians have long collectively celebrated as benign, and proceeds to deconstruct the popular myth that Canada was, and continues to be, a fair and compassionate country.”

“Citing a quote from the book: ‘If Europeans had gotten to know and had accepted Indigenous Americans and Africans as equals during colonial times instead of adopting White supremacist racist beliefs, which have ruled supreme in negativity depicting both as savages for the better part of five centuries, these people of colour would not have suffered the indescribable hells they have.’ A very very powerful statement…. I’m really really proud that someone from Nova Scotia is writing this kind of material.”

“This is not a happy story, but an attempt at genocide never is….. It is a tale of deception, greed, brutality, bigotry, and humiliation. Ultimately though, it is a study in perseverance and survival.”

“Want an eye-opening ‘New World’ vision through Indian eyes…. Paul tells of the subjugation of the Micmac People.”

“Your work is a valuable contribution to Nova Scotia literature, quite apart from the challenging message it conveys.”

“I started reading your book, I got so angry I had to put it down to finish later. Congratulations. Somebody had to do it and you did a fine job.”

— Late Isabelle Tony Shay Knockwood, author of Out of the Depths: The Experiences of Mi’kmaw Children at the Indian Residential School at Schubenacadie, Nova Scotia