State Violence in Canada from Slavery to the Present 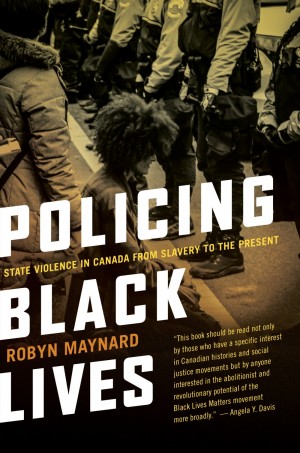 Delving behind Canada’s veneer of multiculturalism and tolerance, Policing Black Lives traces the violent realities of anti-blackness from the slave ships to prisons, classrooms and beyond. Robyn Maynard provides readers with the first comprehensive account of nearly four hundred years of state-sanctioned surveillance, criminalization and punishment of Black lives in Canada.

Emerging from a critical race feminist framework that insists that all Black lives matter, Maynard’s intersectional approach to anti-Black racism addresses the unique and understudied impacts of state violence as it is experienced by Black women, Black people with disabilities, as well as queer, trans, and undocumented Black communities.

Robyn Maynard’s meticulously-researched and compelling analysis of state violence challenges prevailing narratives of Canadian multiculturalism and inclusion by examining how structures of racism and ideologies of gender are complexly anchored in global histories of colonization and slavery. This book should be read not only by those who have a specific interest in Canadian histories and social justice movements but by anyone interested in the abolitionist and revolutionary potential of the Black Lives Matters movement more broadly.

A crucial work in chronicling Black experiences in Canada. If you only read one book this year, make it this one. Policing Black Lives is a comprehensive and necessary book for anyone who cares about the past, present and future of Black life in this country. Brilliant work!

In this eye-opening and timely book, Robyn Maynard deftly and conclusively pulls back the veil on anti-Black racism in Canada, exploding the myth of multiculturalism through an emphatically and unapologetically intersectional lens. In compelling and accessible prose, Maynard provides a sweeping overview of Canadian state violence from colonial times to the present, seamlessly articulating the relationship - and distinctions - between settler colonialism and anti-Blackness, and centering Black women, trans and gender nonconforming people within the broader narrative. Through an analysis squarely situated in the global socioeconomic context, Policing Black Lives explores parallels between state violence in Canada and its neighbor to the South, as well as the unique legal, social and historical forces informing criminalization through segregation, surveillance, “stop and frisk”/carding/street checks, the war on drugs, gang policing, the school to prison pipeline, welfare “fraud” and child welfare enforcement, and the conflation of immigration and criminality. The result is both eye-opening and chilling, firmly pointing to shared fronts of struggle across borders. Policing Black Lives is a critical read for all in Canada and the United States who #SayHerName and assert that #BlackLivesMatter, and essential to movements for Black liberation on Turtle Island.

To understand this moment in Canada when Black communities are asserting that Black Lives really do matter, readers need this book.

“Grounded in an impressive and expansive treatment of Black Canadian history, Maynard has written a powerful account of state anti-Black violence in Canada. Empirically rich and theoretically nimble, this work is an outstanding contribution to Black Canadian Studies.”

Timely, urgent, and cogent…brilliantly elucidates the grotesque anti-Black racist practices coming from the state, and other institutions imbued with power over Black people’s lives.

Thanks, Robyn Maynard, for opening all of our eyes to a scary history and frightening present for Black Canada.