Out To Defend Ourselves

By Maxime Aurélien and Ted Rutland 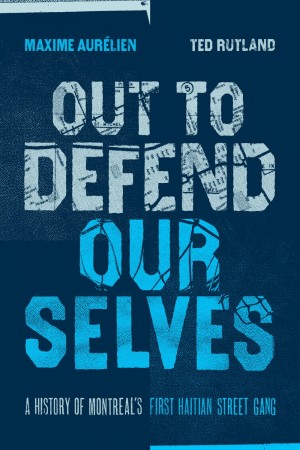 This first critical history of a street gang in a Canadian city is a result of a four-year collaboration between a university professor (Ted Rutland) and the leader of les Bélangers (Maxime Aurélien). Out to Defend Ourselves tells the story of Montreal’s first Haitian street gang, les Bélangers. It traces how the gang emerged from a group of Haitian friends, the children of migrants from Haiti in the 1970s. It documents the forms of racial violence they experienced and their battles against them. It also documents the everyday lives of the gang members, the petty crime some members engaged in to make ends meet, and how the police actions against the gang changed its nature and function – making it, finally, a more criminally oriented and violent formation. It is a story about a gang, but it is also a story of young Haitians making their lives in 1970s and 80s Montreal and a story about Montreal in a period of great change.

The spectre of the Black gang haunts the police imaginary, leading to propaganda about crime, policing, and the necessity of racial profiling. In this collaboration between Ted Rutland, author of Displacing Blackness, and Maxime Aurelian, leader of Montreal’s first Haitian street gang Les Belanger, the authors challenge us to crucially rethink the role of street gangs in political organizing and the role of the police in creating street violence. An intervention into whitewashed histories of Canada and Quebec, this book examines racism in Montreal and the strategies mobilized by Black community for self-defence. This book critically reshapes our understanding of race, gangs, and policing in Montreal and Canada more broadly, shattering myths of Black gangs through the voice of Aurelian. A crucial read at a time where policing is increasingly under scrutiny and where myths of Black criminality serve to buttress police powers.

— El Jones, author of Abolitionist Intimacies and Live from the Afrikan Resistance!