Memoirs from the Left 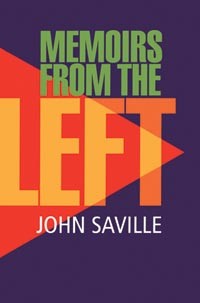 John Saville has been one of the most influential writers of the second half of the twentieth century in the field of British Labour History. He was a Professor of Economic and Social History at the University of Hull. He has written or edited over twenty books including 1848, The Consolidation of the Capitalist State, and the Dictionary of Labour Biography. His political memoirs touch upon: • Early life; joining the Communist Party at the LSE, travels in France and Nazi Germany • Stories of war service as an Anti-Aircraft Gunnery Sergeant-Major • WW2 army life in India–colonialism and the Communist Party • Teaching at the Department of Economic History at the University of Hull • Deeply involved in the crisis of the British Communist Party in 1956, following the Soviet invasion of Hungary • Acquaintances and co-thinkers: the MI5 agent planted at his home in Hull, John Griffith, Stuart Hall, Philip Larkin, Doris Lessing, Ralph Miliband, Sir John Pratt, Raphael Samuel, E.P. Thompson • Working against America’s Cold War politics • Editing the Dictionary of Labour Biography and the Socialist Register • Life in Hull, perspectives on the rightward drift of Labour An engaging read that provides much insight on the life of John Saville, his writings and his impact on the thinking of The Left.