George W. Bush and the Hubris of Empire

By Roger Burbach and Jim Tarbell 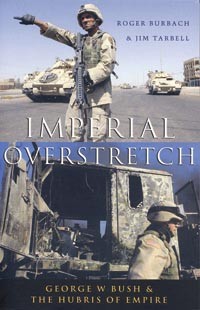 George W. Bush has fundamentally changed America’s place in the world. In some neo-conservative circles the word “empire” is back in fashion, and a great republic that broke away from the British Empire is now supposed to be proud of its new imperial role. This book explains how the neo-conservatives and the petro-military complex have hijacked US foreign policy. It examines the price that Americans will have to pay for this new era of unlimited US military might–a never-ending fear of terrorism, mushrooming defence and security spending, the erosion of civil liberties at home and the deaths abroad of tens of thousands of civilian and military combatants.

Previous empires have foundered on the rocks of imperial overstretch–the cost of trying to run and protect empires eventually outstrips their capacity and the willingness of the citizenry to pay. At the heart of this disturbing and timely book lies the ultimate question: Is the US in danger of going down that road? Who around George ‘dubya’ Bush is pushing him along that path?