Industry and Society in Nova Scotia 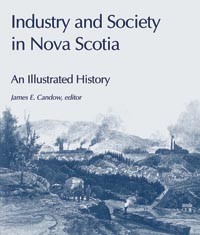 In 1990 the steam locomotive Samson was relocated to its current home in Stellarton’s Museum of Industry, where it was dismantled, conserved, re-assembled and put on display as the centerpiece of the Museum’s permanent collection. It is now the oldest surviving locomotive in Canada, and one of the oldest in the world. Samson, Hercules and John Buddle arrived in Nova Scotia in September 1839, the most conspicuous evidence yet that this British North American province had joined the industrial revolution. Ten fascinating essays, in this richly illustrated volume, detail Nova Scotia’s industrial history. Ranging from coal, steel, and iron to ropeworks and railways, this work reminds us of our rich and diverse industrial heritage. One of the central themes that emerges is the persistent role of external capital in Nova Scotia’s industrial development. From the British-owned General Mining Association in the 1820s to the American-owned TrentonWorks in our own day, foreign ownership has prevailed. The human impact of industrialization, forming the second main theme of the collection, is discussed in chapters by Janet Guildford and Michael Earle. Women, Guildford notes, were “downwardly mobile in the face of industrialization.” Meanwhile, Earle recounts the building of a steel union local in Sydney, the first important breakthrough for industrial unionism in the Canadian steel industry. Other chapters focus on lesser-known passages of our industrial history, including stone quarrying and rope manufacture. Contents: Introduction James E. Candow and Debra McNabb-The Iron Works of Londonderry, 1848-1910 William D. Naftel-The Building of Steel Union Local 1064, Sydney, 1935-37 Michael Earle-Coal in the History of Nova Scotia Michael Earle-An Introduction to Nova Scotia’s Industrial Railways Robert D. Tennant, Jr.-Stone Quarrying in Wallace Peter Latta-Dartmouth Ropeworks, 1869-1958 James D. Frost-The Rise and Fall of Industrial Amherst, 1860-1930 Nolan Reilly-Wooden World to Tourist Gateway: Yarmouth in the 1880s and 1890s Margaret J. Dixon and Delphin A. Muise-The Role of Women in Nova Scotia’s Industrial Revolution Janet Guildford-Heritage Recording of the Starr Manufacturing Company Premises, Dartmouth Anthony D. Barlow