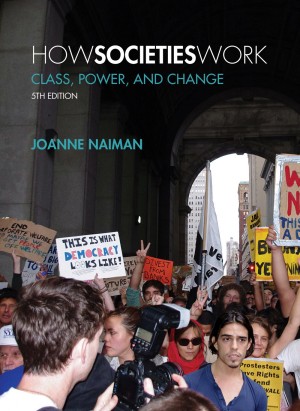 In 2011, protesters around the world – including Canada – called for changes to the societies in which they live. Many observers were asking: “What do they want?” Some answers to this question can be found in How Societies Work, a unique and accessible introductory sociology textbook that introduces students to the structure of contemporary societies and the power relationships within them. In contrast to most introductory textbooks, How Societies Work explores a broad range of sociological concepts and theories while simultaneously creating a coherent picture of modern societies. Drawing on fields as diverse as anthropology, genetics, economics, social psychology, history and politics, this innovative and popular text looks at both the roots of modern societies and the current structures within them. This approach helps undergraduate students make sense of our complex social world and encourages them to connect the social world to their own lived experiences.

This extensively revised and updated fifth edition includes discussions of the roots of the recent global economic crisis and worldwide responses to it, growing social inequality, broader global struggles for change, the growth of the security state in Canada and the sudden resurgence of political protest in North America. The final chapter looks to the future, examining such issues as the possible consequences of climate change, increased forced migration of peoples and the changing dynamic of global power. More boxes, quotes and “think about it” elements have been added to the fifth edition, while the language, clarity of presentation and many examples make it even more accessible to readers. It is an introductory textbook that truly engages students in the “sociological imagination.”

This fifth edition is presented in a large format, making it easier to read and even more student friendly. A testbank and power point presentation are available for instructors upon request.

“While most introductory sociology textbooks cover a waterfront of theoretical approaches, this one provides a focused analysis on the historical development of the modern system of power and domination and tracks its current operation in Canadian society. My students have found this book to provide a powerful set of tools and a lens to understand the society that they live in.”

“In my opinion, it’s the best introduction to sociology text I’ve seen, and I wouldn’t use any other.”

“The feedback from students was overwhelmingly positive. They found it easy to read, understand and follow, and actually enjoyed reading it. They also noted how thought provoking the ‘think about it’ questions were. I too am very pleased overall.”