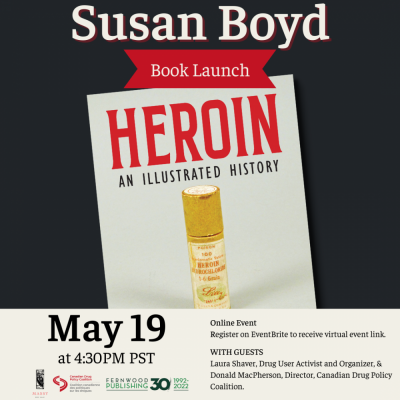 Fernwood Publishing in collaboration with the Canadian Drug Policy Coalition (CDPC) and Massy Books presents the launch of Heroin: An Illustrated History. This event will feature drug activist Laura Shaver on her work at Vancouver Area Network of Drug Users (VANDU) and a reading from the author Susan Boyd. The speakers will draw from their years of advocacy for the end of drug prohibition, the establishment of diverse services and harm reduction. Register to receive virtual event link

Laura Shaver is an experienced drug user activist and organizer. She has won several awards for her work in Vancouver’s Downtown Eastside community where she resides. She is the President of the BC Association of People on Opiate Maintenance (BCAPOM) and the lead Peer Advocacy Navigator with the BC Centre on Substance Use (BCCSU). She has been the President of the Vancouver Area Network of Drug Users in the past and continues to sit on the VANDU board. She also sits on the editorial board for the award-winning Crackdown podcast. Laura has been instrumental in several direct actions to improve conditions for people on opiate maintenance, including a class action lawsuit against the Province of British Columbia over clinic fees and advocacy related to BC’s methadone formulation change.

Susan C. Boyd is a scholar/activist and distinguished professor at the University of Victoria. She has authored several articles and books on drug issues, including Busted: An Illustrated History of Drug Prohibition in Canada. She was a member of the federal Task Force on Cannabis Legalization and Regulation. She is a long-time activist who collaborates with groups that advocate for the end of drug prohibition and for the establishment of diverse services.

Heroin is an illustrated history of Canadian heroin regulation over two centuries. Susan Boyd points to our failure to address the overdose death epidemic caused by criminalizing drug users and to the decades of resistance to harm-reduction policies. Heroin, discovered in 1898, was heralded as an important medicine and successfully marketed as a pain reliever and cough suppressant. Until the early 1950s, heroin was prescribed for therapeutic use in Canada. Yet, illegal heroin use became the focus of drug prohibition advocates and law enforcement, who painted it as highly addictive and destructive. Systemic racism was the impetus for our first anti-heroin laws; the race, gender and class of users influenced drug control, which, by the 1930s, became the focus of law enforcement. Flawed ideas about heroin and people who use the drug have shaped drug law and policy for decades. This book is informed by documentary evidence and the experiences of people who use/used heroin, drug user unions and harm-reduction advocates. These sources highlight the structural violence of drug policy that uses prohibition and criminalization as the main response to drug use.