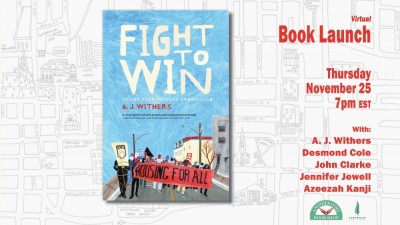 Withers draws on their own experiences as an organizer, interviews with Ontario Coalition Against Poverty (OCAP) activists and Toronto officials, and freedom of information requests to provide a detailed account of the work of OCAP and uncover the fundamental flaws in homelessness policy. This book shows poor people’s organizing can be effective even in times of neoliberal retrenchment.

Fight to Win also details OCAP’s dual activist strategy — direct-action casework coupled with mass mobilization — for both immediate need and long-term change. It tells the stories of four key OCAP homelessness campaigns. These campaigns demonstrate the validity of OCAP’s longstanding critiques of dominant homelessness policies and practices, especially Housing First. Each campaign was fully or partially successful: these victories were secured by anti-poverty activists through the use of, and the threat of, direct disruptive action tactics.

Author of Fight to Win: Inside Poor People’s Organizing and organized with OCAP for about 20 years. They are also the author of Disability Politics and Theory and A Violent History of Benevolence: Interlocking Oppression in the Moral Economies of Social Working (with Chris Chapman) and co-founder of FactCheckToronto.ca

Author of The Skin We’re In: A Year of Black Resistance and Power, journalist, and co-creator with El Jones of the website “Yes Everything” (www.yeseverything.ca). Longtime social justice activist, including Black liberation, police abolition and homelessness advocacy.

Co-founded the Ontario Coalition Against Poverty in 1990 as a radical anti-capitalist alternative to reformist approaches to poverty mitigation. John worked as an Organizer for OCAP until his retirement in 2019. He currently holds the Packer Visitor in Social Justice at York University.

Queer, disabled activist living in a shelter-hotel fighting the City of Toronto for better conditions in the shelter system and stop the criminalization of unhoused people.

Co-sponsored by Another Story Bookshop.

More about: Fight to Win.