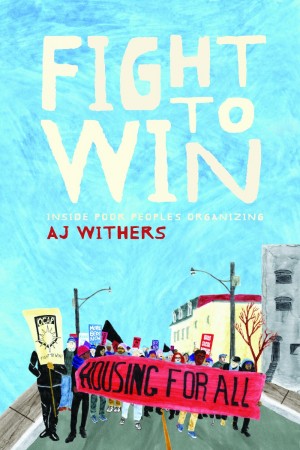 AJ Withers draws on their own experiences as an organizer, extensive interviews with the Ontario Coalition Against Poverty (OCAP) activists and Toronto bureaucrats, and freedom of information requests to provide a detailed account of the work of OCAP. This book shows that poor people’s organizing can be effective even in periods of neoliberal retrenchment.

Fight to Win tells the stories of four key OCAP homelessness campaigns: stopping the criminalization of homeless people in a public park; the fight for poor people’s access to the Housing Shelter Fund; a campaign to improve the emergency shelter system and the City’s overarching, but inadequate, Housing First policy; and the attempt by the City of Toronto to drive homeless people from encampments during the COVID pandemic.

This book shows how power works at the municipal level, including the use of a multitude of demobilization tactics, devaluing poor people as sources of knowledge about their own lives, and gaslighting poor people and anti-poverty activists. AJ Withers also details OCAP’s dual activist strategy — direct-action casework coupled with mass mobilization — for both immediate need and long-term change. These campaigns demonstrate the validity of OCAP’s longstanding critiques of dominant homelessness policies and practices. Each campaign was fully or partially successful: these victories were secured by anti-poverty activists through the use of, and the threat of, direct disruptive action tactics.

AJ Withers provides an exemplar for how to do scholarship on social justice activism in a socially just way. Fight to Win is both theoretically incisive and profoundly pragmatic – closely analyzing the relations of power that sustain injustice, as well as the cracks and fissures within them. Through a detailed account of specific anti-poverty actions organized by the Ontario Coalition Against Poverty, Withers produces insights widely valuable for justice struggles that are “fighting to win.”

In Fight To Win, A.J. Withers, provides powerful and inspiring accounts from the inside of poor people’s housing and shelter struggles that use the direct action power of disruption to organize and win. A must read for all anti-poverty and social justice activists, this unique book creatively draws on political activist ethnography and mapping social relations of struggle to tell stories of struggle of the Toronto based Ontario Coalition Against Poverty from 2016 through to the pandemic. Crucial terrains of struggle are examined including problems with the officially supported Housing First strategy; to the often neglected major statistical battles over the official counting of beds versus counting those who cannot find beds,; to the city and police attacks on the encampments of people surviving the pandemic.

— Gary Kinsman, anti-capitalist and anti-poverty activist, formerly with the Sudbury Coalition Against Poverty