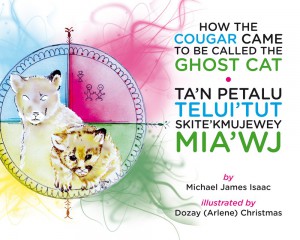 The human need to belong is very powerful, so much so that we often sacrifice parts of who we are in order to be accepted. This is the tale of a young cougar, Ajig, who makes this sacrifice – and pays dearly. A curious and adventurous cougar, Ajig decides to build a new home in a strange forest. When he finds that all of the animals in the forest are afraid of him, Ajig agrees to stop behaving like a cougar so that he can make friends. But when Ajig tries to return to his birthplace, he learns that he is no longer welcome. Lost between two worlds, the young cougar becomes a “ghost cat.” This beautifully illustrated book, written in both Mi’kmaw and English, reflects the experiences of First Nations peoples’ assimilation into the Euro-Canadian school system, but speaks to everyone who is marginalized or at risk.