Panic and Progress in the Lives of Young Women 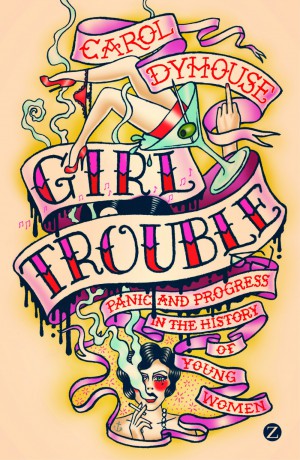 Girls behave badly. If they’re not obscenity-shouting, pint-swigging laddettes they’re narcissistic, living dolls floating around in a cloud of self-obsession, far too busy twerking to care. And this is news.

In this witty and wonderful book, eminent historian Carol Dyhouse shows that for over a century now, where there’s a horrific headline, a scandal or a wave of moral outrage you can bet a girl’s to blame. Whether it be stories of “brazen flappers” staying out, and up, all night in the 1920s, inappropriate places for Mars bars in the 1960s or Courtney Love’s mere existence in the 1990s, bad girls have been a mass-media staple for more than a century. And yet, despite the continued obsession with their perceived faults and blatant disobedience, girls are infinitely better off today than they were a century ago.

This is the story of the challenges and opportunities faced by young women growing up in the swirl of the twentieth century and the pop-hysteria that continues to accompany their progress.

“A loud, disturbing, eloquent, and crucial rallying cry against the concept of a “post-feminist” world.”

“There’s a certain twisted pleasure to be had from revisiting some of the wild and wonderful things that men (and women, too) have believed in the past about women’s incapacity for education and employment.”