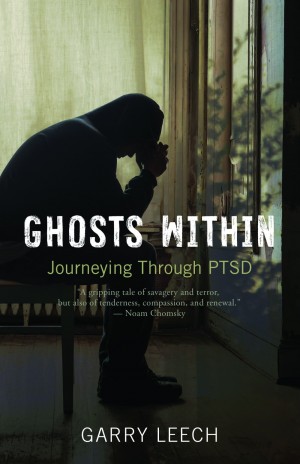 What are the long-term psychological costs of violence and war? Journalist Garry Leech draws from his experiences as a war correspondent, his ongoing personal struggle with PTSD and the latest research on this mental illness to provide a powerful and vivid answer to this question. For thirteen years, Leech worked in Colombia’s rural conflict zones where he experienced combat, witnessed massacre sites and was held captive by armed groups. This raw account of his journey from war on the battlefield to an internal, psychological war at home illustrates how those who work with traumatized populations can themselves be impacted by trauma.

Leech removes some of the stigmas, fears and ignorance related to PTSD in particular, and mental illness in general, by shedding light on a largely invisible illness that mostly manifests itself behind the closed doors of our homes. Ultimately, the book uses a journalist’s journey through PTSD to provide a message of hope for all those who suffer from this illness.

“In this sensitive personal narrative, war correspondent Garry Leech reveals the torment of this frightful ailment and the horrors he witnessed in Latin America…A gripping tale of savagery and terror, but also of tenderness, compassion, and renewal.”

“Garry Leech weaves his own raw experiences together with clinical understandings from today’s leading PTSD researchers and writers. As such, this book may be helpful for his fellow war correspondents as well as military veterans, accident victims, and survivors and witnesses of abuse and violence.”