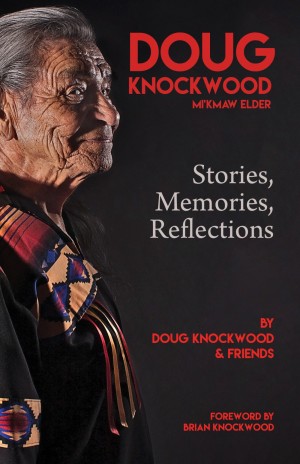 Freeman Douglas Knockwood is a highly respected Elder in Mi’kmaw Territory and one of Canada’s premier addictions recovery counsellors. The story of his life is one of unimaginable colonial trauma, recovery and hope.

At age 6, Knockwood was placed in the Shubenacadie Residential School, where he remained for a year and a half. Like hundreds of other Mi’kmaw and Maliseet children, he suffered horrible abuse. By the time he reached his twenties, he was an alcoholic. He contracted tuberculosis in the 1940s, had one lung and several ribs removed.

Having hit rock bottom, Knockwood gained sobriety in his thirties through Alcoholics Anonymous. He went on to become a much sought after drug and alcohol rehabilitation counsellor in Canada. Many of Doug’s initiatives have been implemented across Canada and used by thousands of people, both Indigenous and non-Indigenous. Looking back now, says Doug, “I realize I wasn’t only helping them. They were helping me to gather strength in my presentations, in feeding them the knowledge I received, the same as it was fed to me. That helped me to gain confidence in myself; doing all these things that I didn’t know I could yet do”.

This book is an in-depth look at Doug Knockwood’s life that also casts a wide and critical glance at the forces that worked to undermine his existence and the indomitable spirit of a man who recovered from, yet still struggles to overcome, those forces.