Canada In The World

Settler Capitalism and the Colonial Imagination

By Tyler A. Shipley 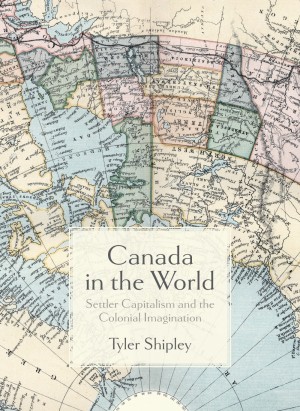 An accessible and empirically rich introduction to Canada’s engagements in the world since confederation, this book charts a unique path by locating Canada’s colonial foundations at the heart of the analysis. Canada in the World begins by arguing that the colonial relations with Indigenous peoples represent the first example of foreign policy, and demonstrates how these relations became a foundational and existential element of the new state. Colonialism—the project to establish settler capitalism in North America and the ideological assumption that Europeans were more advanced and thus deserved to conquer the Indigenous people—says Shipley, lives at the very heart of Canada.

Through a close examination of Canadian foreign policy, from crushing an Indigenous rebellion in El Salvador, “peacekeeping” missions in the Congo and Somalia, and Cold War interventions in Vietnam and Indonesia, to Canadian participation in the War on Terror, Canada in the World finds that this colonial heart has dictated Canada’s actions in the world since the beginning.

Highlighting the continuities across more than 150 years of history, Shipley demonstrates that Canadian policy and behaviour in the world is deep-rooted, and argues that changing this requires rethinking the fundamental nature of Canada itself.

“Shipley meticulously traces the racial capitalist line that runs through Canadian history, insisting that we understand that Canada moves in the world as a state that is dedicated first and foremost to the interests of white capital.”

“The book fundamentally disrupts the notion that Canada is a benevolent, helpful, middle power, and sets the record straight on the colonial and imperial aspects of the Canadian state.”

“Canada in the World should be both rigorously studied and strenuously debated by all who seek to understand the country’s past, transform its present, and reimagine its future.”

“Shipley’s outstanding scholarship is matched by the accessibility of his writing; this book will reach across audiences of all varieties, as it deserves.”