An Act of Genocide

Colonialism and the Sterilization of Aboriginal Women 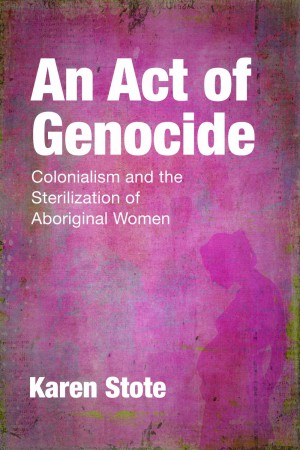 During the 1900s eugenics gained favour as a means of controlling the birth rate among “undesirable” populations in Canada. Though many people were targeted, the coercive sterilization of one group has gone largely unnoticed. An Act of Genocide unpacks long-buried archival evidence to begin documenting the forced sterilization of Aboriginal women in Canada. Grounding this evidence within the context of colonialism, the oppression of women and the denial of Indigenous sovereignty, Karen Stote argues that this coercive sterilization must be considered in relation to the larger goals of Indian policy — to gain access to Indigenous lands and resources while reducing the numbers of those to whom the federal government has obligations. Stote also contends that, in accordance with the original meaning of the term, this sterilization should be understood as an act of genocide, and she explores the ways Canada has managed to avoid this charge. This lucid, engaging book explicitly challenges Canadians to take up their responsibilities as treaty partners, to reconsider their history and to hold their government to account for its treatment of Indigenous peoples.