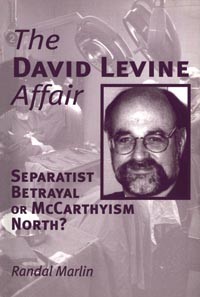 When the novice Board of Trustees of the newly-amalgamated Ottawa Hospital appointed David Levine as the new CEO at a salary of $330,000, it expected some controversy, but nothing like the huge outcry that followed. From the initial healine in the Ottawa Citizen on May 1, 1998, “PQ Envoy to Head Hospital,” to the lynch-mob mentality at a public meeting on May 19th, to picketing and calls for boycotts of the Board members’ businesses, Levine became a scapegoat for many problems, resentments, and frustrations felt by the Ottawa-area population. Sections of the media did little to allay these fears and resentments, and at times strongly incited them. Randall Marlin’s fascinating analysis of the David Levine affair shows not just what happened, but also the far worse things that might have happened. It signals the fragility of Canada as long as basic ideas of fairness, tolerance, and respect for truth are given second place to flag-waving nationalism, sensationalism, and rumour.