Law and the Politics of Exclusion in Ontario

By Joe Hermer and Janet Mosher 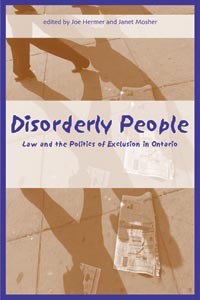 The Ontario Safe Streets Act is the first modern provincial law to prohibit a wide range of begging and squeegee work in public space. This Act is representative of a much wider set of reforms that the Ontario government has carried out in the administration of criminal justice and social welfare. Central to the neo-conservative character of these reforms has been the construction of “disorderly people,” of those portrayed as “welfare cheats,” “squeegee kids,” “aggressive beggars,” “violent youth” and “coddled prisoners.” Drawing from their expertise in law, sociology, criminology and geography, contributors to this collection make visible the role of law in the practices and logic of a government that polices “public” safety through the exclusion and punishment of some of the most vulnerable people in society. Essays in this collection critique the constitutional soundness of the Safe Streets Act. They document the everyday lives of squeegee workers, map the moral geography of the city, explore the “commodification of crime,” examine the shrinking of both the public and private spaces of the poor, and investigate the “penalty of cruelty” that now characterizes Ontario corrections policy.