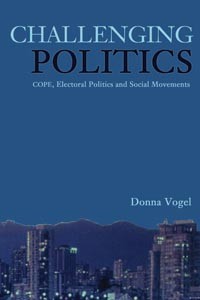 Founded in 1968, the Coalition of Progressive Electors (COPE) claims to represent a coming together of “ordinary citizens” united around a program of people’s needs. As a municipal political party in Vancouver, COPE has attempted to voice the diverse issues and objectives of progressive movements in civic politics, and has placed itself in direct opposition to its chief opponent, the corporate-sponsored Non-Particisan Association (NPA).

Challenging Politics is a history that puts particular emphasis on how, in recent years, COPE sought to embrace the broader political perspective of activists in social movements. In light of the current disappointment with the NDP and through this examination of COPE, Donna Vogel makes a valuable contribution to the debate surrounding the future of left politics in Canada and discusses the role of municipal politics in the era of globalization. COPE is examined as a microcosm of two enduring tensions in left politics–the role of electoral politics in a broader left project and the challenges of building coalitions between diverse trade union and other social movements. A postscript looks at the significance of the COPE successes in recent urban elections in Vancouver.

“The author does a very nice job of describing why traditional left parties need to open up to the new politics of the social movements… a fine piece of political sociology.”