The Latimer Case and People with Disabilities 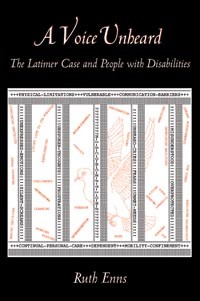 Tracy Latimer could not speak, however, her life was much more than Canadians have been led to believe and her voice has been overlooked in the debate over whether her father received justice.

Tracy’s was not the only unheard voice. Disability is severely stigmatized in Canada. One of the manifestations of that stigma is the selective deafness of the able-bodied population on issues of vital importance to citizens with disabilities.

A Voice Unheard shows the positive options for Canadians with disabilities. It features parents, able-bodied and disabled, who see potential where others see only dark despair. It shows how the majority of people with disabilities know that death was not Tracy Latimer’s only option. Their voices are valid in the debate about Robert Latimer and disability and must be heard.

Ruth Enns understands the struggle for disability rights in Canada. She speaks from her own experiences with disability resulting from polio and glaucoma. Ruth has been a freelance writer for many years. She lives in rural Manitoba.

The cover image was created by Alexandra Michaels. Limited in her motor functions, as a result of cerebral palsy, she creates unique designs on her 1969 electric typewriter, with its black and red, reel-to-reel ribbon, to convey an intimate expression of her personal experiences.