Teacher’s Guide for Viola Desmond: Her Life and Times

Biography has typically been an under-utilized resource in English language arts and social studies. Recently, however, it has gained the attention of educators as a valuable tool in making students more self-aware as well as introducing them to the larger historical context (Christenson, 2013; Deal, 2017: Lerner, 2005). Biography can illustrate to students the influence of such factors as race, gender and class in shaping the lives of individuals and it can bring history alive for students by helping them to see how they and other individuals fit into the larger historical narrative. Above all, biography gives students an awareness of how making choices in their daily lives influences their future and, in the case of Viola Desmond’s life, in particular, they see how spontaneous decisions of the moment can sometimes have lasting historical consequences.

Viola Desmond: Her Life and Times explores the life of a Canadian civil rights icon and pioneer Black businesswomen. In reading the story of Viola Desmond, students gain an understanding of the broader culture and events that shaped her life. They are introduced to the widespread existence of discrimination in Canada during most of the twentieth century and they learn that through Viola’s upbringing and strength of character, she was able to overcome many of the barriers of discrimination in order to pursue her dream of becoming a successful beautician and businesswoman.

The biography of Viola Desmond helps fill an important void in Canadian education resources because it addresses the little understand struggle for racial equality in Canada. Traditionally, the topic of civil rights has been taught largely from an American perspective. During Black History Month, for example, Canadian students are taught about the courageous efforts of American civil rights leaders like Martin Luther King Jr. and Rosa Parks, while very little mention is made of an entire generation of Canadian civil rights activists who eventually helped forge the culture of human rights that exists today in Canada.

For teachers of English language arts, Viola Desmond: Her Life and Times is valuable and timely resource that meets the curriculum outcomes in courses 9-12 in all provinces. Teachers in social studies who want to explore Viola Desmond’s life in the larger historical context of the African Canadian experience in Canada should use her biography together with Viola Desmond’s Canada: A History of Blacks and Racial Segregation in the Promised Land and the Teacher’s Guide. These resources together provide students with a comprehensive overview of the history of Blacks in Canada and the ongoing struggle for equal rights and social justice in Canada. These books also introduce students to a variety of primary historical resources, which as recent literature indicates, helps promote critical thinking and deep learning among students (Friesen and Scott, 2013; Sandwell, 2003; Stearns, Seixas and Wineburg, 2000)

Using Viola Desmond: Her Life and Times in the Canadian History and Social Studies Curriculum.

Viola Desmond: Her Life and Times introduces students and general readers to one of Canada’s most important civil rights icons and pioneer African Canadian businesswoman. The book meets the provincial Canadian history and social studies curriculum outcomes in the following courses on the intermediate and secondary levels:

The Desmond $10 bill is designed around the central themes of equality and human rights. It prominently features a portrait of Viola Desmond on the front and the Museum of Human Rights in Winnipeg on the back. The bill departs from other Canadian banknotes in displaying a vertical instead of the traditional horizontal format. This is intended to suggest that Canada is moving in a new direction, away from the injustices of the past. The design and symbols of the new bill are discussed on the Bank of Canada website which provides an excellent teaching resource. The Bank of Canada website also explores the process by which Viola Desmond was selected as the first Canadian born women to be singularly represented on our Nation’s currency. For additional educational resources, The Bank of Canada Museum has provided a blog for teachers with suggestions for several lesson plans.

Exploring the design of the Desmond $10 bill introduces students to the topic of Canadian identity and how we as a nation choose to memorialize our past. These are interesting subjects for students to explore and they involve several recent controversies such the protest over the commemorative statue of Edward Cornwallis in Halifax and the fight over the proposed construction in northern Cape Breton of a “Mother Canada” stature, a multi-million dollar memorial honoring Canada’s war dead.

Viola Desmond’s character was shaped by her close family ties, especially through her relationship with her parents, Gwendolyn and James Davis. She also had a deep connection to the Black community in the North End of Halifax. Chapter 1 examines these important influences and it demonstrates that in spite of the pervasive pattern of discrimination that existed during Viola’s life, she was able to succeed in fulfilling her career goals, first by becoming a teacher and later by becoming a successful businesswomen and Canada’s preeminent Black beauty culturist. The Chapter offers students the opportunity to explore several interesting aspects of Viola’s life in the context of the history of Halifax.

Chapter 2: Memories of My Sister and the Roseland Theatre Incident by Wanda Robson

In this personal account, Wanda Robson, the youngest sister of Viola Desmond, relates some of her memories about her sister and the Roseland Theatre incident. Wanda discusses how Viola provided a supporting role in her life and at critical moments in her life she served as a “guardian angel” in helping her out of a crisis in order to gain her footing in life. She also mentions her reaction to her older sister’s arrest for refusing to give up her seat at the Roseland Theatre in New Glasgow. It is clear from this account and from her own experiences, which she described in Chapter 1, that racial prejudice had a lasting influence on Wanda and, as she explains, it was not until much later in her life that she became fully aware of how these incidents were part of the larger struggle for racial equality in Canada. Wanda’s early childhood encounters with racial prejudice are similar to those of other Black children who grew up under the shadow of racial segregation and discrimination. Wanda’s personal accounts described in chapters 1 and 2 of the book should help students to gain a better understanding of the effects of racial prejudice as well all other forms of prejudice. This provides an excellent opportunity for teachers to begin a dialogue with their students about the nature and effects of all forms of prejudice including bullying, homophobia, anti-Semitism and racism.

Many regard Viola Desmond as Canada’s Rosa Parks. In spite of the differences between these two individuals, they shared a similar strength of character and moral compass. When personally confronted with racial injustice they both had the courage to engage in a spontaneous act of civil disobedience. The Roseland Theatre incident occurred nine years before Rosa Park’s arrest for refusing to give up her seat aboard a racially segregated bus in Montgomery Alabama. It is a uniquely Canadian story of courage and it highlights important similarities and differences between the patterns of racial segregation that existed in Canada and the United States during most of the twentieth century.

Chapter 4: A Woman of Her Time: Viola Desmond and Black Beauty Culture in Canada

This chapter focuses on Viola Desmond as a pioneer Black businesswoman. It provides the historical context for understanding her efforts to build a beauty culture enterprise for Black women in Canada, which was inspired by the examples of Madam C. J. Walker and Madam Sara Spencer Washington, two of the major pillars of the Black beauty culture in the United States. Viola dreamed of building a beauty culture business that would provide products and services for Black women in Canada but her aspirations were cut short as a result of the Roseland Theatre incident and its aftermath.

In addition to discussing Viola’s entrepreneurial success, this chapter introduces readers to the evolving ideal of beauty among Black women in North America and it describes how Viola extended the “Brownskin” ideal of beauty that was popular during the 1930s and 40s. She created her own “Sepia” line of beauty products, which were “especially blended to enhance dark complexions.” She promoted an image of Black womanhood and beauty that was part of the evolving sense of racial identity among Black women in Canada and United States.

Viola had a positive influence on the lives of all those who knew her. This is particularly evident among her students who studied under her at her Desmond School of Beauty Culture. As a woman of courage in the struggle for equal rights and as a pioneer Black businesswoman, Viola also had a lasting influence on Canada. Her act of defiance against the practice of racial segregation was a catalyst in the struggle for racial equality and human rights in Nova Scotia and in the rest of Canada. This chapter discusses Viola’s legacy in relation to the emergence of the human rights movement in Nova Scotia following the Roseland Theatre incident and its immediate aftermath. Although Viola eventually gave up her beauty culture business and moved to New York City in the mid 1950s, she continued to inspire leaders in the human rights movement. Today, Viola has become a Canadian human rights icon and is represented on our national currency. This historic milestone will help insure that her legacy will remain permanently etched into our national consciousness.

Epilogue: Toward a New Direction. 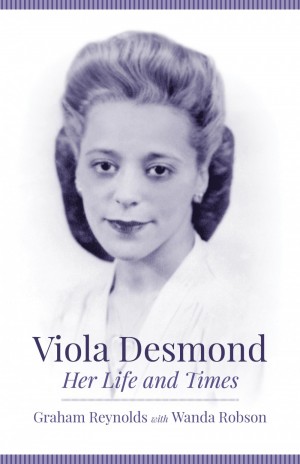