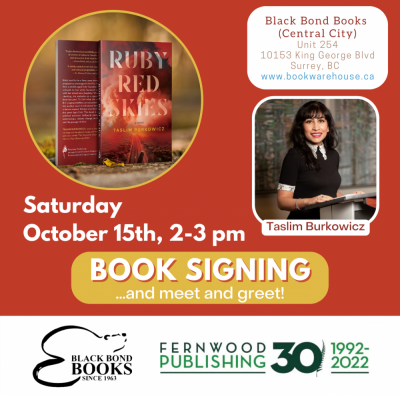 Ruby used to be a fiery, sexy, musical genius. But when she got pregnant as a teenager in the 90s, her life took a turn into banality. Now a middle-aged Indo-Canadian woman, she feels unseen and unheard by her white husband and struggles to communicate with her mixed-race daughter. When she discovers her husband cheating, she embarks on a quest to unearth exciting secrets from her past. To find what she needs, she drives straight into B.C.’s raging wildfires, accompanied only by the fantastical stories her mother used to tell about their ancient Mughal ancestry — a dancer named Rubina who lived in the concubine quarters of the great Agra Fort. This book is at once historical fiction and political romance, deftly navigating themes of mixed-race relationships, climate change, motherhood, body shame, death and the passage of time.

Taslim Burkowicz’s work is inspired both by her Indo-Canadian heritage and her global travels and experiences. She has published two previous novels, The Desirable Sister and Chocolate Cherry Chai, which was listed on CBC Books’ 2017 Fall Preview. She has a bachelor’s degree in political science and education from Simon Fraser University. Taslim resides with her husband and three boys in Surrey, B.C., where she focuses on writing, running and dancing. Fazeela Jiwa is a writer and editor with a special interest in social justice and radical politics. She is an Acquisitions and Development Editor with Fernwood Publishing, and had the great pleasure of working with Taslim again on Ruby Red Skies!