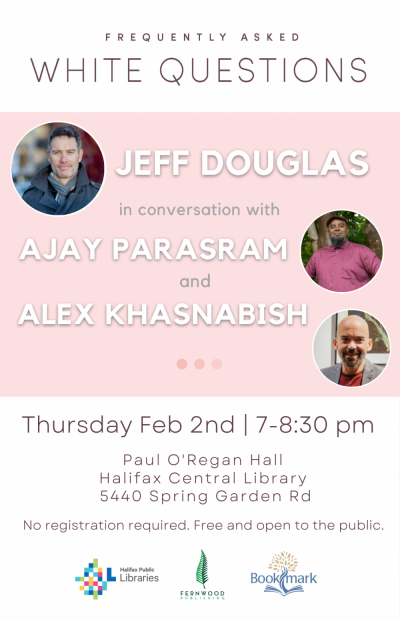 Are you a white person with questions on race? Are you a racialized person who is tired of answering the same questions over and over? Fernwood Publishing and the Halifax Public Libraries welcome you to a town hall on Frequently Asked White Questions by Ajay Parasram and Alex Khasnabish, a basic guide to anti-racism and racial privilege. This conversation will include the authors and be moderated by CBC radio host, Jeff Douglas.

This event is free and open to the public. Masks encouraged.

Jeff Douglas is a born storyteller with a background in theatre and narration. Douglas is the host of Mainland Nova Scotia’s afternoon show, MAINSTREET, on CBC Radio One.

Alex Khasnabish is a writer, researcher and teacher committed to collective liberation living in Halifax, on unceded and unsurrendered Mi’kmaw territory. He is a professor in sociology and anthropology at Mount Saint Vincent University. His research focuses on radical imagination, radical politics, social justice and social movements.

Ajay Parasram is a multigenerational transnational byproduct of the British empire, with roots in South Asia, the Caribbean and the settler cities of Halifax, Ottawa and Vancouver. He is an associate professor in the Departments of International Development Studies, History and Political Science at Dalhousie University in Kjipuktuk (Halifax), unceded Mi’kma’ki. His research interests surround the colonial present, or the many ways through which strings of historical colonial entanglements continue to tighten the limit of political action today, and how those strings might be undone.