You Must be a Basketball Player

Rethinking Integration in the University 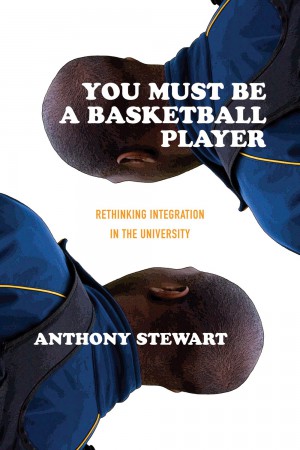 “Courageous and peerless, accessible and engaging, Stewart’s critique of the unseemly whiteness of the academy is a tour de force. His account of white academic privilege, homogeneity, cowardice, and hypocrisy with respect to matters of race and integration proceeds with keen insight and telling intellectual rigor. His analysis of white academia’s ‘theoretical’ evisceration of race and its practical and discursive actualities is nothing short of brilliant. The indictment of the monolithic and self-satisfied white demographic of academic departments of history, English, and philosophy (“the big three”) is wonderfully timely. Any scholar - especially any un-self-conscious white or black scholar - who fails to read Stewart’s work loses. This critique is a triumph of public sphere activism … straight out of Canada!” – Dr. Houston A. Baker, Jr., Distinguished University Professor, Department of English, Vanderbilt University. Author of Betrayal: How Black Intellectuals Have Abandoned the Ideals of the Civil Rights Era

Listen to Anthony Stewart talk about his book with Shelagh Rogers on CBC’s The Next Chapter http://www.cbc.ca/thenextchapter/