We Were Not the Savages (3rd Edition) First Nations History 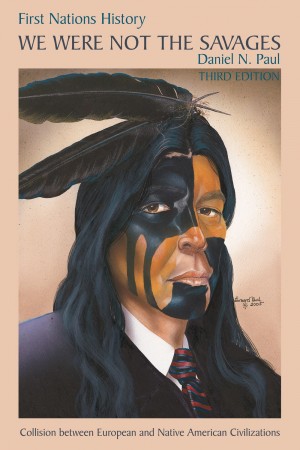 “We Were Not the Savages … is unique, in chronological scope and in the story it tells, covering the last three centuries of Mi’kmaq history in detail. Prior to the appearance of this book it was common for historians to downplay or even deny the violence inflicted on the Mi’kmaq people by European and Euro-American colonizers. This work, more than any other piece of scholarly production, has headed off that consensus at a pass. Scalp-bounty policies are now recognized as a historical problem worthy of investigation.

The book will also be of particular interest to readers in the United States for a variety of reasons. First, the early history of colonization in the Maritimes is closely tied to the history of the colonies that became the United States, and as late as the 1750s New England’s political leaders played a prominent role in directing the course of colonial affairs on Cape Breton Island and Nova Scotia. … Second, the chapters on the nineteenth and twentieth centuries provide a detailed and much needed basis of comparison for anyone seeking to understand the similarities and contrasts between the U.S. and Canada on questions of “Indian Affairs.” And finally, it is important to recognize that we have far too few histories written by Native American authors—very few indeed that cover as extensive a time span as this book does.”

“Having, over the years … read most of the sources you cite in your book, I had long ago arrived at the same conclusion you have. Certainly, white intrusions everywhere in the world have been disastrous for indigenous peoples.”

“Count me in too, among your book’s advocates… [it] knocks the smile off Englishmen who claim their colonial presence among Indians was ‘better’ than that of the Spanish.”

“We Were Not the Savages is a provocative and excellent book…. It is brave, insightful, unflinching and above all honest. And, most important, it greatly enhances our positive images of Amerindians.”

“Reading the pages of this book, continually affirms for me, how good it is to be a Mi’kmaq. I so wish that my father was still living. Wouldn’t he be so proud that such a book was available. I also wish that this history book was in existence years ago, a book that now empowers me and fills me with great pride to be a Mi’kmaq.”

This updated edition incorporates Daniel Paul’s ongoing research. It clearly and profoundly shows that the horrors of history still rain upon the First Nations people of the present.