The Contested Schoolhouse in Maritime Canada 1850–2010 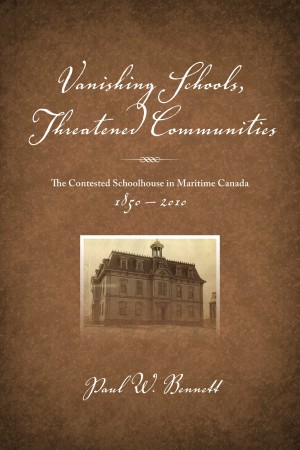 Traditional schoolhouses and neighbourhood schools are disappearing at an alarming rate, making way for “big box” schools that serve multiple communities and adhere to the logic of modernization, centralization and uniformity. In Vanishing Schools, Threatened Communities, author Paul W. Bennett explores the phenomenon of school closures, focusing on Maritime Canada from 1850 until the present day. Here is a lively, stimulating book that examines the rise of common schooling from one-room schoolhouses that encouraged local democratic control through to the rise of “super-sized” schools governed by a vast bureaucracy that silences public participation. Though the public has not always remained silent, local “save our schools” movements have not succeeded in halting the march of “progress.” Bennett sets out, in this colourful history of schools, to remind us of the principles that formed the basis of the public education system and urges us to return to these principles in order to better serve the needs of our children and our communities.