Environment, Law and the State in Canada 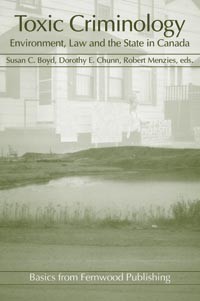 Critical research, writing and advocacy by legal academics and practitioners, NGOs, indigenous peoples and eco-feminists has existed on a global scale since the 1960s, but not until the 1990s did criminologists begin to examine environmental crime in a more concerted way. This late entrance by criminologist has much to do with who is involved in environmental crime–namely upper strata, mostly “white” men who run corporations and state agencies and the perception of environmental crime as soft crime. There are “critical” criminologists who are attempting to enforce existing legislation and policies and/or promote public education. For these reformists, debates tend to centre around prospective strengths and weaknesses of criminal law, civil law and self-regulating and other methods of policing and protecting ecosystems. Other criminologists examine how the “toxic” or “criminogenic” nature of capitalism enables states to facilitate and perpetrate environmental harms with virtual impunity. Toxic Criminology is the work of an assemblage of academics, activists, politicians and legal practitioners, all of whom harbour a wide range of interests and involvements in the study of, and resistance against, environmental wrongdoing. Individually and collectively, the authors address theoretical, politico-economic, legal, cultural and human dimensions of crimes and harms against the Canadian environment.