SLAPPs and the Judicial Repression of Political Discourse 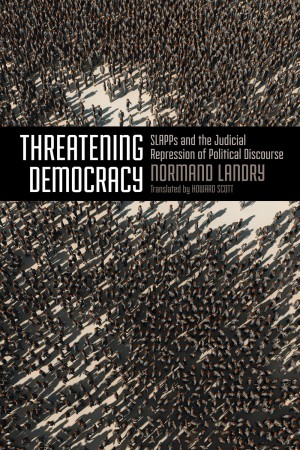 Threatening Democracy is an introduction to the phenomenon of judicial intimidation used against socially and politically active citizens. Strategic lawsuits against public participation (also known by the acronym SLAPP) involve the deliberate use of judicial procedures as tools for intimidation, censorship and political reprisal in the context of social and political debates.

Normand Landry discusses strategic lawsuits against public participation by addressing their conceptual difficulties and synthesizing the various social, political and psychological issues associated with SLAPPs. Landry details the processes by which politically active citizens are bullied out of a public sphere of political debate and confined into a legal arena of private action. Landry also provides a comprehensive review of the rights and freedoms threatened by this practice of legal intimidation. Examining SLAPPs in Canada, the United States and Australia, Threatening Democracy illustrates the ways in which the legal system is instrumentalized against activists in order to impede social change.

In revealing deeply rooted legal inequalities and injustices, Threatening Democracy offers a pointed critique of our legal system. In response, Landry proposes an anti- SLAPP survival guide and surveys the potential of various anti- SLAPP laws in effect around the world.