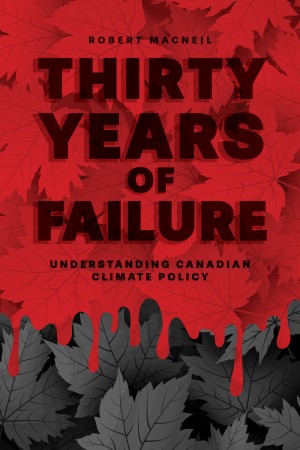 Thirty years ago, Canada was a climate leader, designing policy to curb rising emissions and demanding the same of other countries. But in the intervening decades, Canada has become more of a climate villain, rejecting global attempts to slow climate change and ignoring ever-increasing emissions at home.

How did Canada go from climate leader to climate villain?

In Thirty Years of Failure, Robert MacNeil examines Canada’s changing climate policy in meticulous detail and argues that the failure of this policy is due to a perfect storm of interrelated and mutually reinforcing cultural, political and economic factors — all of which have made a functional and effective national climate strategy impossible. But as MacNeil reveals, the factors preventing a sensible, sustainable climate policy in Canada are also the keys to change, and he offers readers an understanding of the strategies and policies required to decarbonize the Canadian economy and make Canada a global leader on climate change once again.

“Thirty Years of Failure will jolt a certain type of optimistic Canadian who believes all is okay, who quietly consumes, rolls up his rim to win, and exhibits an unshakable belief in our inherent goodness.”