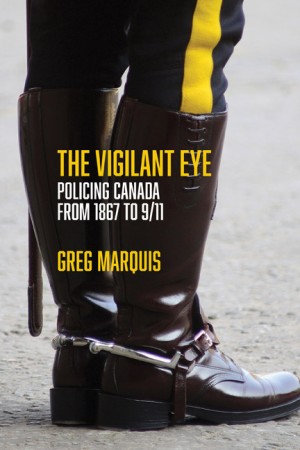 In The Vigilant Eye, Greg Marquis combines the narrative and chronological approach of traditional institutional history with the critical approaches of social history, legal history and criminology. The book begins with the English and Irish roots of nineteenth-century British North American policing and traces the development of the three models of law enforcement that would shape the future: the local rural constable, the municipal police department and the paramilitary territorial constabulary.

Marquis examines the development of provincial police services, whose expansion coincided with the rise of mass automobile ownership and controversies over alcohol prohibition and control, and their eventual absorption into the RCMP. In terms of political policing, the vigilant eye has monitored, harassed and disrupted various social and political movements ranging from Fenians to communists, to Quebec separatists and environmentalists. Marquis argues that the style of community policing in vogue during the 1970s and 1980s lacked confidence and had a limited impact.

Canada’s simplistic crime-fighting model undermines genuine reform, including curbs on the use of deadly force on citizens, and justifies the increased militarization of policing. Marquis argues that it is time for citizens to turn their vigilant eye towards police and policing in their own communities.