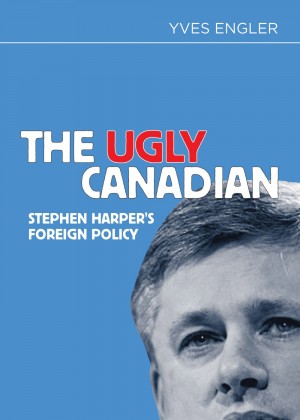 Stephen Harper’s foreign policy documents the sordid story of the Canadian government’s sabotage of international environmental efforts, a government totally committed to tar sands producers and a mining industry widely criticized for abuses. Furthermore, this sweeping critique details Harper’s opposition to the “Arab Spring” democracy movement and his backing of repressive Middle East monarchies, as well as his support for a military coup in Honduras and indifference to suffering of Haitians following the earthquake that devastated their country. The book explores Canada’s extensive military campaign in Libya, opposition to social transformation in Latin America and support for a right-wing Israeli government. With an eye to Canada’s growing international isolation, The Ugly Canadian is a must read for those who would like to see Canada adopt a more just foreign policy. Praise for the book…

“Stephen Harper’s government has fundamentally changed Canada’s foreign policy in a way most Canadians do not understand. The notion of the Ugly Canadian may be hard to accept but it is true and I for one am deeply grateful to Yves Engler for this important book.”

— Maud Barlow, National Chairperson of the The Council of Canadians

“Ugly Canadian is a well written, thoroughly researched, powerful indictment of the Harper government’s radical shift to the right in foreign policy. Whether it is demonstating callous indifference to global eco-issues, taking an absolutist pro-Israel Middle East stance, meddling militarily in Libya, Haiti and Afghanistan, or rebirthing the notion of a warrior spirit, Canada can no longer be considered a peace loving middle power. This book is more than a wakeup call, it is a call to arms for Canadians to take note of where we are headed on the international stage-before it is too late.”

“One of Yves Engler’s previous books helped give me the idea to hold a Stop Harper sign in Parliament. This book provides rich evidence why Harper must be stopped.”