The Tragedy of Progress

Marxism, Modernity and the Aboriginal Question

By David Bedford and Danielle Irving-Stephens 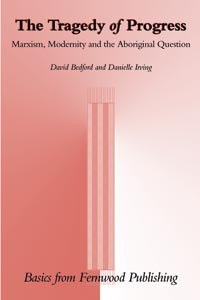 The Left in Canada has had an uneasy relationship with the Aboriginal struggle for justice. There is a natural sympathy and alliance between the working class and its political representatives who are struggling against the exploitation of labour and Aboriginal peoples and nations who are resisting the dispossession of their lands and the loss of their culture. Yet the co-incidence of interests has very rarely led to any support by labour and the Left for Aboriginal resistance. In fact, rather than being allies, they have often been opponents. In the Maritimes, for example, two recent events-the Paul and Marshall cases-have led to the extension of Aboriginal rights to harvest wood and fish. These decisions were met with silence and even opposition by the Left and its constituency. Why has the Left not embraced more enthusiastically the Aboriginal struggle? This book argues that the answer can be found in the analyses of, and assumptions about, progress. The Left has drawn upon analytic strains in Marxist thought which emphasize the inevitability and benefits of “progress,” defined as the increasingly intensified utilization of technologies, especially relating to production. Hence, the desire by many Aboriginal leaders to preserve a traditional material culture has seemed retrograde and reactionary to those on the Left who equate worker emancipation and technological progress. Furthermore, many on the Left argued that the right to self-determination of nations does not apply to the nation-fragments to which Aboriginal peoples have been reduced. Against such a reading, this book proposes that centring the Marxist notion of alienation can provide the basis for a more fruitful co-operation between the emancipatory projects of the Left and Aboriginal peoples.